The Secret to Bitcoin Profits Is Hiding in This Warehouse

Bitcoin is down again on on concerns related to price manipulation following yet another major theft via hacking. This time on the South Korean exchange, Coinrail, where half a billion dollars disappeared into the ether over last weekend.

Cryptocurrencies are a bad joke, and every investor who’s bought in is the punchline.

I sure hope you’re not among them.

The chart is downright nasty.

There were more than 1,565 cryptocurrencies the last time I looked, according to coinmarketcap.com. More than a few had multi-billion-dollar valuations including several that literally didn’t exist.

Tron, for example, was nothing more than buzz-filled white paper, yet was valued at more than $7 billion early this year. At the same time, Dentacoin, a cryptocurrency usable only at your favorite dentist, was worth more than $1 billion – both according to The Washington Post.

I’d call “baloney”… only Oscar Mayer beat me to it.

The company launched a cryptocurrency coin marketing campaign backed by “bacoin” which was worth three slices of the company’s bacon for every coin created.

Mining, incidentally, closed last May – in case your stomach is rumbling.

The latest drop is being caused by serious, recently released research from the University of Texas which found that at least half of Bitcoin’s price increase last year was caused by price manipulation on the popular Bitfinex exchange.

Researchers also found that another cryptocurrency called Tether was used to buy Bitcoin during critical price drops as a means of stabilizing prices. UT professor John M. Griffin and graduate student Amin Shams observed that less than 1% of hours with “heavy Tether transactions” are associated with 50% of Bitcoin price increases and 64% of other “top” cryptocurrencies, including Gash, Ethereum Classic, Ethereum, Litecoin, and ZCash, just to name a few.

Here’s How “They” Did It

Tether is a digital token that’s priced in equivalent U.S. dollars intended to make trading Bitcoin “seamless” by allowing investors to convert cash into digital currencies. It’s backed one-to-one, according to its creators – meaning there’s one dollar in reserve for each dollar of Tether created.

Here’s where the scheme goes off the rails.

Many Bitcoin exchanges allow purchases only in cryptocurrencies, which means that unsuspecting investors have to buy Tether first to get to Bitcoin or other digital money they fancy. That means the more Tether there is, the more demand they create for Bitcoin.

I’ve long alleged this was happening, but this is the first serious proof outside of my own preliminary investigation.

UT researchers found that Tether issuers were creating huge amounts of Tether tokens, knowing they’d be used to purchase Bitcoin. That, in turn, created artificial demand and drove up price. It also suggests that there are more Tether tokens than dollars even though the former is supposedly backed by the latter.

The situation reminds me of “pump and dump” or “short and distort” schemes on par with any of the shenanigans highlighted in the 2013 Leonardo DiCaprio film, Wolf of Wall Street. Stuff, I might add, that would land you in the grey-bar hotel if you tried something similar with stocks.

It’s also EXACTLY the kind of slight-of-hand that got Wall Street into so much trouble in late 2007 with highly risky off-balance sheet derivatives that led to the Global Financial Crisis.

Worse, it’s not a bunch of people doing this like many people think.

It’s a highly concentrated and very select group of “actors” – many of whom probably have criminal intentions on par with Bernie Madoff or Charles Ponzi. In plain English, that means Bitcoin may be the most tightly controlled, manipulated and obscenely leveraged financial instrument in the world.

At the risk of sounding like a broken record, Bitcoin is NOT an investment and never will be.

A group of researchers – Neil Gandal, JT Hamrick, Tyler Moore, and Tali Oberman – published another paper in the May 2017 Journal of Monetary Economics that’s equally damning yet which somehow largely escaped the mainstream media at the time. They found that a singleactor likely drove the U.S. Dollar/Bitcoin exchange rate from $150 to $1,000 in less than two months.

Gandal, Hamrick, Moore and Oberman also found that trading volume on all cryptocurrency exchanges increased “greatly” on days where there was suspicious activity.

Cryptocurrency’s true believers are out in force at the moment with explanations intended to explain away any semblance of logic. The one thing they literally can’t afford to lose is your interest.

Brian Kelly, CEO of Brian Kelly Capital Management LLC, noted that a price of $6,500 is consistent with “fully depreciated mining costs” – meaning current prices are roughly equivalent to the costs of mining using new computers that must be purchased roughly every 18 months to keep up. He’s apparently keen to buy on “momentum” around $6,800, according to CNBC.

Tom Lee, of Fundstrat, remains convinced that $25,000 a coin is in the cards. He notes that institutions are getting interested but have not yet “come in” because of regulatory uncertainty. The implication, of course, is that they will and will, in turn, propel prices sharply higher.

Other crypto experts are saying that trailing stops have “hit bottom” based on technical analysis, including a relative strength reading of 30-40 and the 200-day moving average commonly used to determine buying or selling by institutions. Only you can’t apply conventional metrics here.

Joe DiPasquale, CEO of BitBull Capital, told CNBC that “it’s important to note that the spot price [of Bitcoin] is still up 140% from this date 12 months ago.”

A Reddit post simply observed, “‘tulip bulbs my butt!” That’s a dig at anyone from JPMorgan Chase & Co. (NYSE:JPM) CEO Jamie Dimon to Berkshire Hathaway Inc. (NYSE:BRK.A)’s Warren Buffett who have been consistent and harsh critics, drawing comparisons between Bitcoin and the Tulip Mania of 1636.

My favorite comment, though, came from New York University Professor and Nobel Prize winner, Nouriel “Dr. Doom” Roubini. He called Bitcoin the “mother of all bubbles” last February, and took a shot at Bitcoin bull Tim Draper (who believes Bitcoin will hit $250,000 by 2022) on Twitter Wednesday calling it “____coin.” I’ll let you fill in the blank!

Anybody who is relying on the rapid appreciation of a currency backed by nothing more than the desire to be wealthy or “get around the system,” forgets their history.

Governments all around the world over will clamp down and, when they do, the cryptocurrency system will be held accountable in the same way conventional financial instruments are. There will be standard contracts, regulated sales channels, exchanges, taxes, and more.

In the meantime, cryptocurrency is backed by the same unadulterated greed that has driven every get-rich-quick scheme since the dawn of time.

They will come and go.

I hear frequently from investors who want to debate the merits of one cryptocurrency over another.

Cryptocurrencies are highly correlated which means they move in concert. If one goes up, they all go up. And if one goes down, you better hold on to your bippies because there’s no place to hide. 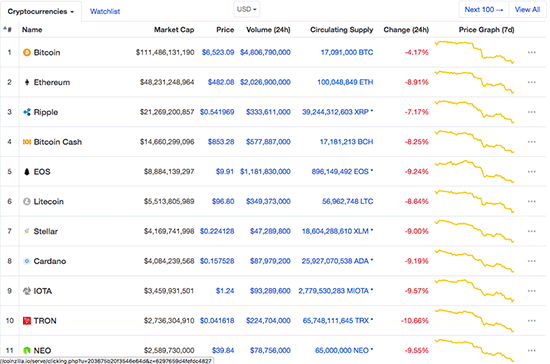 Your job as an investor is to separate other investors from their money by making calculated decisions which result in huge profits.

My job as Chief Investment Strategist is to identify the opportunities that will allow you to do so.

In this case, it’s not Bitcoin or any other digital cryptocurrency.

It’s the emotion driving legions of investors up the proverbial mountain the way greedy miners were convinced they’d make a fortune by flocking to the Sierra Nevadas during the 1849 Gold Rush.

What you want to be doing in this instance is selling ’em the “shovels” they need to go in search of their fortune knowing full-well most will fail or worse, lose terribly for having done so.

That’s what Samuel Brannan did in 1849. You’ve heard me talk about him before so I’m not going to repeat that story today.

What you need to know is that Brannan was making millions a month at a time when $1 million meant something… selling shovels.

Brannan didn’t give a hoot about the price of gold… just that he sold a shovel to every miner in pursuit of their dreams.

I’ve recommended companies like NVIDIA Corporation (NasdaqGS:NVDA) in the past as a way to do this. That company makes the GPU chips that help miners create digital currencies of all shades.

More importantly, Nvidia is a real company with real earnings, real people, and real profits, which means you’ve got a legitimate investment on your hands if you buy in.

Today, though, I want to recommend that you take a good hard look at Overstock.com Inc. (NasdaqGM:OSTK).

Chances are, you know the company as an online retailer. But, what you may not know is that it’s also a key player in the digital currency world.

Overstock has been working closely with regulators to launch the world’s first SEC-compliant ATS (alternative trading system) for blockchain assets, the first private blockchain bond offering, and the first ever public issuance of a blockchain security, according to Business Insider.

We’re not alone in our thinking, incidentally.

In closing, let me be clear.

There is no doubt that the world needs cryptocurrencies but that does not mean they’re ready for primetime… let alone have a place in your portfolio.

The risks are, quite literally, not worth it but the technology driving digital money, on the other hand, IS.