Shares of Costco Wholesale (NASDAQ:COST) have been on fire, climbing more than 31.5% from its December lows to its recent highs.

I love Costco stock because COST is a high-quality company with a strong business model and an excellent source of recurring high-margin cash flow – its membership fees. Those fees help the company offer an experience to its customers that not many of its competitors can rival. All of that, in turn, makes Costco stock a great long-term investment,  but not any price.

For all of the positives surrounding COST stock, it’s not a cheap stock by any means. I love Costco. I’ve been a member since I was stocking shelves at a Costco store at 4 a.m. as a teenager. And I love the company’s  management team and culture. But that won’t cloud my judgement when it comes to investing in Costco stock.

Based on this year’s expectations, COST stock trades at just over 30 times this year’s average earnings estimate. That’s a higher valuation than high-quality growth companies like Microsoft (NASDAQ:MSFT) and Alphabet (NASDAQ:GOOGL, NASDAQ:GOOG). But here’s the thing that all three companies have in common: They’re all blue-chip name.

Blue-chip companies should be given higher valuations than other stocks with similar financials. Moreover, sometimes companies should be given premiums because of their outstanding strengths.  For Costco, those include things I’ve already mentioned, like its incredible cash-flow generation and its strong management. Its superior customer experience makes its business more valuable, as does its long track record of impressive results.

For instance, just a few weeks ago management authorized a $4 billion buyback of Costco stock. That’s almost 4% of the company’s market cap at the current Costco stock price. Management also bumped the dividend by 14%, although Costco stock still only yields a little over 1%.

As with any great company, we have to pay a premium to own its stock. But that doesn’t mean we have to pay top dollar. Often, the best time to buy blue-chip companies that trade at premiums is on big pullbacks. Not only because we’re getting a great price, but because they tend to rebound more quickly, too.

Let’s look at the charts. 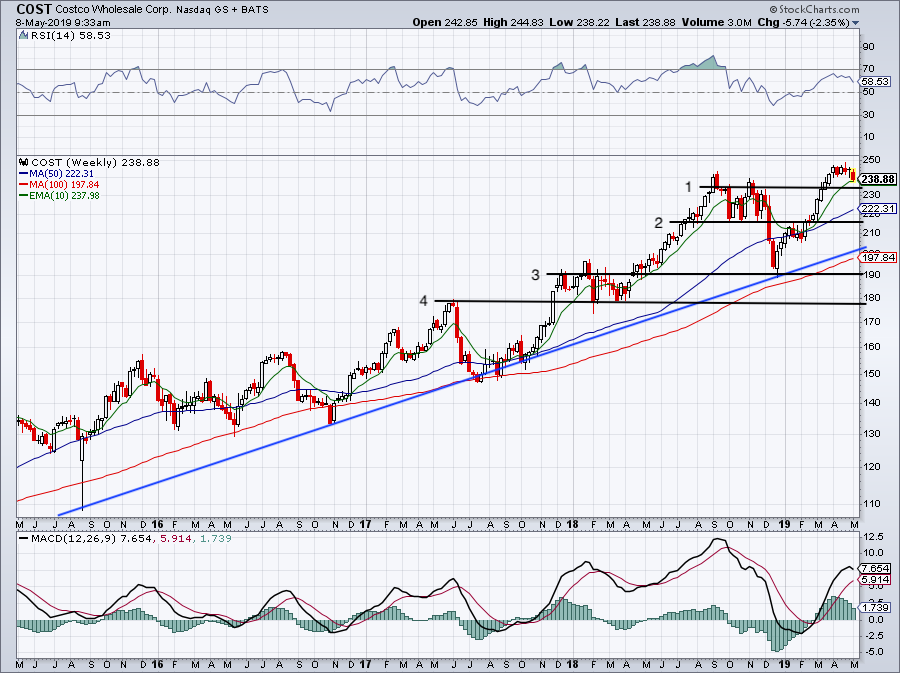 We can see that Costco stock price is about $10 per share off its highs near $250. It’s trading right near  its 10-week moving average. Aggressive bulls may consider this enough of a dip to buy. Some may prefer waiting for a further correction down to the $230-$235 level, which was a solid level of resistance in the second half of 2018.

However, I have my eye on slightly deeper corrections. A decline to the $220 to $223 level would be attractive. That would put Costco stock price stock 10%-12% below its highs and land it near a few notable levels. Around $223 is the 50-week moving average, while $220 was previously resistance and then  turned support.

I don’t know if such a drop will occur, but a drop down to the 200-week would be the best spot to buy Costco stock.

Why may such a drop not materialize? At current prices, it would require a 20% decline from the stock’s highs, to $200.  If that happens, it will only likely occur if either Costco stock slowly stumbles lower after bouncing at several support levels first or the market goes into irrational selloff mode.

The 200-week has been a great place to buy  Costco stock over the last four years. Given the uptrend of Costco stock price, I suspect this will remain the case going forward, too. So that’s my perfect buy spot, whether it’s in a few weeks or six months from now. Full story at Investorplace.com

The $3 Stock ALMOST Everyone is Missing

This is just bizarre…

We have just uncovered perhaps the most unusual stock we've ever seen.

It pays an enormous dividend.

Most curious of all… it trades under a secret name that virtually no regular investor knows.