“Once it’s clear Amazon is coming for a company’s business, what follows is rarely good… for the target.”

Amazon Inc. (NASDAQ:AMZN) has its sights set on a much larger business than usual, and Facebook’s (NASDAQ:FB) digital-ad dominance could be in danger.

Amazon is rapidly growing its advertising segment, which should become a major headwind for FB stock in the next few quarters. In the recent quarter, Amazon’s Other segment revenue — which mostly consists of advertising revenue — increased to $2.5 billion. Even after adjusting this for some accounting changes, the segment showed 56% growth on a year-over-year basis. This is on the back of a similar growth rate in the year-ago quarter.

At the same time, Facebook is facing a wide range of issues including concerns on data privacy and hiring a PR firm to defame critics. There is no quick solution for most of the challenges facing Facebook stock. So even if FB can recover its reputation, during this time it is likely that more ad dollars will shift toward Amazon’s “cleaner” platform — and profits will shift to Amazon stock

In the past, Amazon has relied on the growth of AWS to deliver free cash flow, which it then invested in other segments. However, AMZN is now showing that the advertising segment can become an equally big driver for future profits. In a recent report, Piper Jaffray’s Michael Olson mentioned that by 2021 Amazon’s advertising segment can have an operating income of $16 billion compared to $15 billion for AWS. This shows the importance of advertising for Amazon. 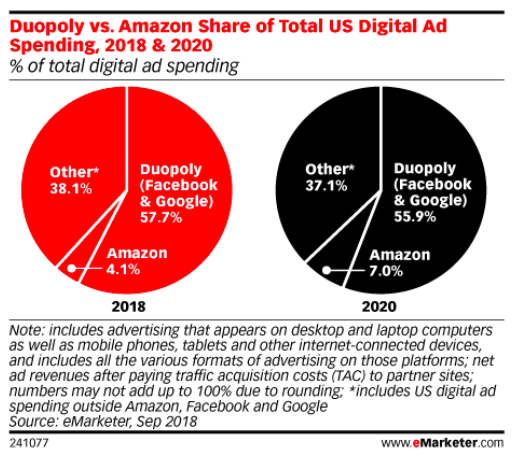 But I believe the growth numbers forecast for Amazon might be pessimistic. We’ve already seen that Amazon can leverage its platform and cash flow to massively grow a segment in a short time.

Why would digital ads be an exception?

While looking at Amazon’s advertising potential, we should also look at Prime Video. Amazon is already bidding for all the 22 regional sports TV networks which would be sold by Disney (NYSE:DIS) as it acquires Twenty-First Century Fox (NASDAQ:FOX, NASDAQ:FOXA). Amazon Prime has membership of over 100 million. The company is pouring huge sums into the growth of Prime Video. Although, Prime Video has not yet shown success similar to Netflix (NASDAQ:NFLX) or HBO, it is certainly possible that over the next few quarters we see more award-winning content from this segment.

Amazon provides advertisers with a clean platform which does not have any of the issues currently facing Facebook. Customers on Amazon are already visiting the platform with an intent to buy. Hence, the chances of converting a click into final sales is higher on Amazon compared to Facebook.

Amazon is not only looking to get a bigger share of the pie, it can change the entire dynamics of the digital-ad world… [Full story at Investorplace]

Is Amazon Going After Bitcoin Too?

Amazon made a very strange move.

Most people don't know about it. And the mainstream media never reported it.

You see, while people were wowed by Bitcoin last October… Amazon quietly registered two website domains. And I believe the reason they did it is because…

Amazon is on the verge of releasing its own cryptocurrency.

This could happen tomorrow… It could happen next week… or it might not happen for a couple more months. But rest assured… Amazon Coin is coming out before the end of 2018.

And to tell you the truth, when a major player like Amazon enters the crypto market… it's going to blow Bitcoin, Ethereum… and any other coin… out of the water.

But here's the thing: The way to play this opportunity is not by buying shares in Amazon's stock, although I think it's a great investment. And you shouldn't stock up on their crypto coins either…

Instead, I've found two backdoor ways for you to profit as soon as Amazon makes this huge announcement.

You want to get in on this and position yourself quickly… before the mainstream media catches on.

Get the full story right here.