It’s time to get out the rifle.

The stock market is shrinking…

And that fact should change how you invest.

According to Wilshire Associates, which compiles benchmarks for U.S. stock markets, the number of public companies peaked around 7,500 in 1997.

Yet despite the decrease in the number of publicly traded companies, the stock market has moved in one direction… up. 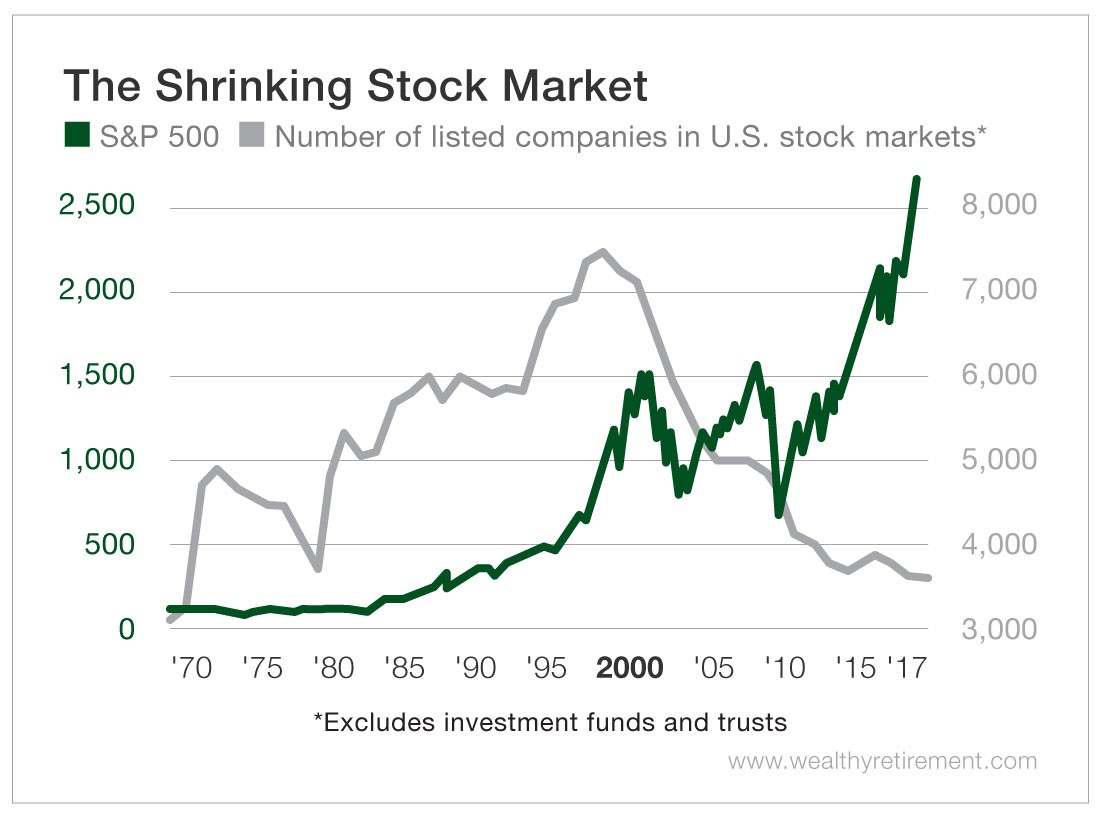 This indicates that fewer and fewer companies are driving the big indexes. And those that do are established names like Amazon, Apple, ExxonMobil, Facebook and Google.

They’re the big dogs. Yet many investors consider them overvalued and believe their explosive growth is behind them.

But that’s not always the case…

If you – like many investors – have been sitting on the sidelines, thinking this market and the companies that control it are overvalued, then you’ve been missing out on quadruple-digit gains…

And you’ll continue to do so unless you adopt a “rifle” approach.

Video: The Best Stock NOT on Wall Street [“Leaked” footage]

If you’ve ever been to the shooting range, you know that a rifle is highly accurate at long distances (300-plus yards, in some cases).

On the other hand, although a shotgun will cause a lot of damage, it’s less accurate and limited by a 75- to 100-yard range.

This is not the time for a shotgun approach to investing…

It’s time to get out the rifle.

Instead of blanketing certain sectors or indexes, you should be targeting companies with solid fundamentals, strong leadership and sound reputations. And you should especially look for companies on the verge of experiencing major catalysts.

But there’s often a one-time catalyst that produces even bigger jumps in share price. And it provides safer gains than a company’s IPO.

According to Kiplinger, this event “generally means a company is going gangbusters.”

In fact, this one-time-ONLY event is responsible for some of the fastest and largest returns in history…

And these are all mature companies.

So if you’re one of those people who think there’s no room for this market to run… you might want to reconsider.

And it certainly doesn’t matter that there are fewer public companies… as long as you know where to aim. Full story at Wealthy Retirement

One of the world's great stock pickers just did something crazy.

He went onstage and outed a secret stock that trades under a hidden name.

Now, keep in mind… this stock picker is legendary for his big trades.

He personally bought Apple in the '90s, when NOBODY thought Apple was going anywhere… and still holds every share.

He bought Amazon in the early 2000s… and still holds every share.

He even bought Netflix THIRTEEN years ago… and still holds every share.

I've looked through his personal trading records… and let me assure you, it's absurd how much he made on these trades.

He's outed a secret stock – trading for less than $3 – that he says is his next big score.

When he revealed what was going on to the crowd, they went crazy…