The recent extreme reveals investors could profit from new all-time highs in the months ahead – with little downside risk.

The sharp drop pushed the S&P 500 into extremely oversold territory, as measured by the relative strength index – or “RSI”… 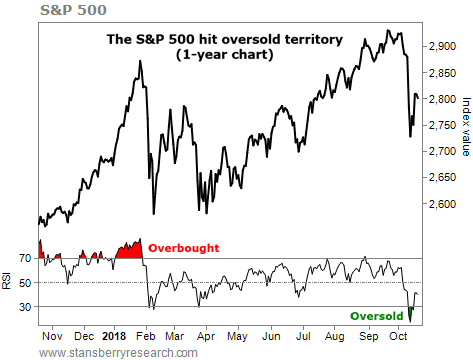 As we mentioned earlier, RSI readings this low for the S&P 500 are extremely rare. Over the past 30 years, the S&P 500's RSI has only dropped below 20 six times.

All six were good buying opportunities. The S&P 500 climbed in each instance, over every time frame we looked at from two weeks to three months.

In the following table, you can see the S&P 500's returns after these six occasions, starting on the day it dropped below 20. Note that there wasn't a single negative return.

The “All Periods” row shows the index's average returns for the given time frame, regardless of the RSI, over the past 30 years. By comparing, we can see that the returns after the RSI dropped below 20 were dramatically better. 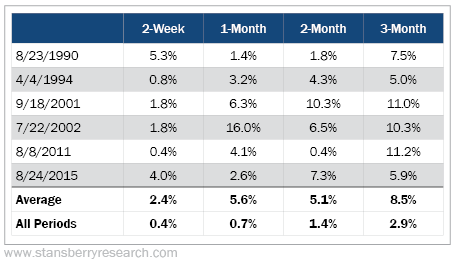 Of course, this doesn't mean that each time the RSI dropped below 20 it marked the exact low. It didn't…

But that was the largest drawdown for any period across all six occurrences. And by the two-week mark, the S&P 500 had bounced all the way back and gained 1.8%.

In other words, buying after these rare RSI extremes has been an excellent idea. If the S&P 500 simply returns its average after the recent extreme, it will close at 2,960 on January 11… a new all-time high.

If you're in the process of selling your stocks, you probably want to rethink your actions. History says now is a good time to be bullish, not bearish.

It's never easy to buy stocks after a large, sudden drop. The losses bring back memories from crises we've experienced in the past. But history shows that buying stocks is exactly what you want to do right now.

If this extreme works as it has in the past, you get to take part in the next leg higher in stocks with minimal risk. We suggest you take advantage.