It’s a nice little REIT. But you really don’t want to own it right now.

In the five-plus years I’ve been publishing the Safety Net column, I’ve never seen a worse dividend safety rating than the current one for AGNC Investment Corp. (Nasdaq: AGNC).

My ratings range from A to F. So F is the lowest I’ll go. But this stock has so many strikes against it, the rating might as well be FF.

AGNC is a mortgage real estate investment trust (REIT). As a result, we look at net interest income (NII) to determine whether the company’s dividend is safe. NII is the difference between the money the company makes investing in mortgages and the interest it pays to borrow money to invest.

Over the past four years, NII has been sliding and is now half of what it was in 2013. Though there is no official forecast, NII will likely be lower this year as revenue and earnings are projected to fall again. 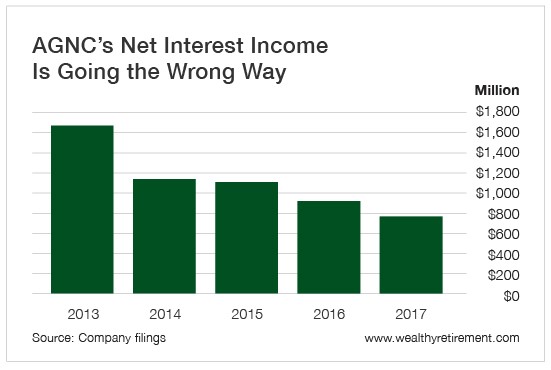 Last year, AGNC paid out $795 million in dividends. That’s $16 million more than it took in. So it couldn’t afford the dividend it paid last year.

And with NII likely falling again this year, there’s a good chance that AGNC will not be able to afford the current dividend.

When my grandmother’s arthritis would act up, she’d recite the line from an old folk song and say, “Marc, the old gray mare ain’t what she used to be.”

The same can be said about AGNC’s dividend. 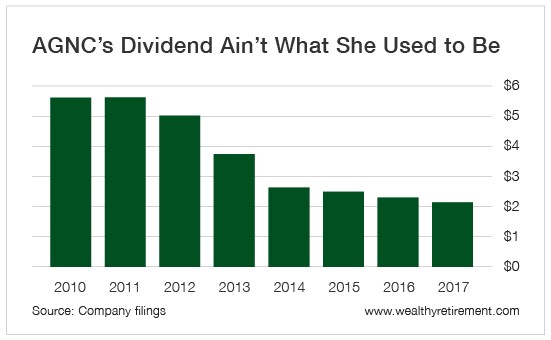 A long history of dividend cuts, the inability to pay its dividend and the worst grade in SafetyNet Pro history make a bet on AGNC cutting its dividend seem like a sure thing.