Americans are turning to video games in record numbers, and these companies are profiting…

“Screen time” wasn’t typically an option in my house when I was kid. We had a television, of course, but we just couldn’t turn it on very often.

In fact, whenever my dad would catch me trying to sneak in some Saturday morning cartoons, he’d whisk me out into the yard and put me to work. Within seconds, I’d find myself with a shovel, saw or pipe wrench in my hands.

I didn’t live a life of deprivation, though. I never missed an episode of Gilligan’s Island, Get Smart or The Wild Wild West.

Back in those days, the living room TV was the only screen in the house. No PCs, laptops, tablets or smartphones.

“Screen time” now is no longer just an occasional mode of entertainment. It is a lifestyle.

Today’s kids — and most adults — leap from one screened device to the next, like a frog jumping across lily pads. Being without a device is simply not an option.

Americans spend an average of 6.3 hours per day interacting with digital media, which is more than double the hours they spent on screens 10 years ago. 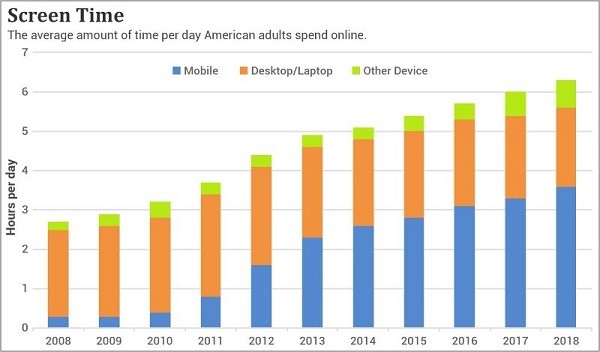 A growing number of adults report being online “almost constantly.” And as anyone who lives in a home with teenagers can attest, “almost constantly” seems to be the norm of the under-20 crowd … especially now that the novel coronavirus has shut down schools, summer camps, travel and most other “offline” activities.

Thanks to these shutdowns, U.S. kids ages 6-12 are spending 50% to 60% more time in front of screens daily. Moreover, due to school going online, our young ones are increasing their visits to kid-focused apps and digital services by nearly 70%. That’s according to data from SuperAwesome, a children’s technology company.

“Overall, kids are effectively going to be spending 2.5 to 3 times more hours of day in front of a digital screen than they historically would have,” Dylan Collins, CEO of SuperAwesome, said.

Only time will tell if the modern screen-time surge produces unhealthy consequences. Staring at a screen for hours a day doesn’t seem particularly healthy, but I’m no expert.

So I’ll leave that assessment to the researchers and scientists.

What I do concern myself with here is the profit component.

We remain a nation of couch potatoes, but the objects of our screen-time affection are changing all the time.

That means the flows of money from our pockets into screen-time companies changes frequently, too.

So today, let’s talk about one place where the newest waves of capital are crashing … video games.

And about some of my favorite trades in that space…

Electric cars are taking over

You simply have to see this…

A new type of battery is pushing everything we thought we knew about energy storage to the limits.

According to automotive insiders, consumers will soon be able to go 1,000 miles on a single charge.

Think about that for a moment…

That means you could drive from New York City all the way down to Daytona Beach, Florida, without stopping!

A 1,000-mile range clobbers even the most fuel-efficient gas vehicles on the road today!

In short, this tech is about to change EVERYTHING.

When you see this live-action demo, you’ll understand why.

If you want to get in on the electric car revolution, this is easily the best way to do it.