This “twilight of the bull” is the perfect time to build a cash position.

As the Treasury continues to pound the market with supply month after month and the Fed keeps pulling money out of the system, bond yields should break out and go much higher.

There are a couple of compelling reasons to look at the shortest-term options – not just because it's important to stay nimble when the world's collapsing around you.

These would be Treasury bills or short-term Treasury notes that you could purchase without fees direct from the U.S. Treasury through its Treasury Direct website. There you can open an account similar to a bank CD account and manage your T-bill holdings via your web browser.

Through this account, you can purchase not only short-term T-bills and notes, but also longer-term notes, as well as bonds – including U.S. Savings Bonds.

The Treasury offers a guided tour to introduce you to these accounts.

When interest rates are rising, like now, you'll want to hold just short-term paper. You can set the account up to roll over your holdings as they mature or pay the cash back to your bank account.

But when rates start to plateau, you may want to extend the term of your holdings by buying notes and bonds to lock in higher rates for the long term.

When there's uncertainty about rates, you could do what bond pros call “laddering.”

Laddering is a strategy that involves purchasing fixed-income securities with different maturity dates to capture solid interest income returns without needing to try to time the market.

But the question here and now is one of market timing. After a decade of receiving virtually zero on their cash savings, investors can finally look forward to getting a return on those savings with virtually no risk.

So now we know this paper is the best way to be in cash. The next thing we need to know is what kind of duration gets us the most bang for our buck.

Crypto Madness: How to Earn Your Digital Fortune

This Spectacular Chart Shows Us Just What to Buy 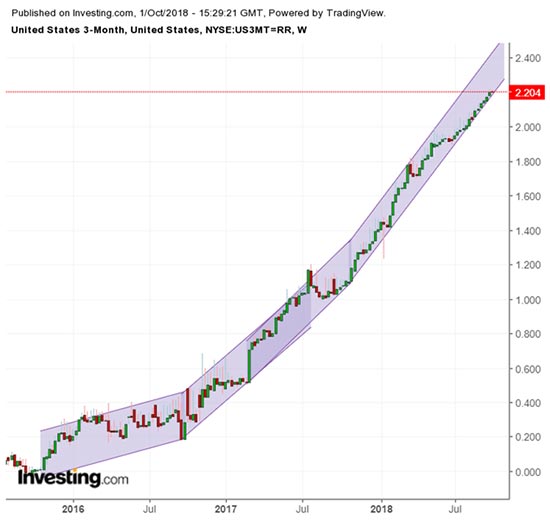 This chart is spectacular! It's a dramatic picture of just how fast the money market is tightening as the Fed pulls money out of the system while the U.S. Treasury keeps needing more and more cash to pay its bills.

In just a year, the three-month bills have soared from paying 1% to 2.20%, and there's no end of that in sight.

Remember, the federal budget deficit has ballooned because of the Trump tax cut and the subsequent Budget Busting Agreement (BBA) that has sent spending soaring.

The federal government is burying the money market with massive amounts of new debt, month in and month out.

There's no reason to believe this will end any time soon.

Likewise, massive deficit spending is likely to assure economic data will remain positive for the foreseeable future. So there's little likelihood that the Fed will back away from tightening.

When would the central bank stop tightening? Well, that would likely take what Janet Yellen calls a “material adverse event.” How “adverse” would this event be? I have interpreted it as a severe economic contraction or massive stock market plunge. Last week, Fed Chair Powell said essentially the same thing.

Like I said, I think it's a smart idea to build a cash position so you're prepared for the “material adverse event.” Cash will give you flexibility, safety, and capital with which to buy stocks at fire-sale prices; bear market rallies can be violent and lucrative.

The bottom line is the best cash strategy right now is to keep on buying 13-week bills and rolling them over until there are signs that Fed tightening is coming to an end. Full story at Money Morning

The richest Americans are all talking about the same asset right now – Bitcoin.

Its meteoric rise in 2017 has turned the investing world upside down. But as much as they love to talk about it, the wealthiest Americans aren't jumping like you'd expect them to.

They seem to think that Bitcoin's rise is all but over.

Most of the gains to be had from Bitcoin have already been made. Sitting at a price well over $15,000 today, ordinary investors are getting a serious case of sticker shock.

Which has presented us with a new up-and-coming digital currency.