This should be part of your routine.

With thousands of publicly traded companies to choose from, how can you identify the best stocks to buy and to have on your watchlist? Start by regularly checking stock lists like Sector Leaders, IBD 50 and the IBD Big Cap 20, all of which have a proven track record of outperforming the S&P 500.

Be sure to also regularly check IBD Stock Lists Update, which shows you which stocks were just added to — and removed from — Sector Leaders, IBD 50 and other screens.

The table below shows how indexes based on IBD's stock lists have significantly outperformed the benchmark S&P 500. In 2017, the Sector Leaders screen more than doubled the performance of the S&P, while the IBD 50 outpaced it by 79%. IBD stock lists have continued to top the S&P 500 in 2018. (Data as of Sept. 28, 2018).

Why Do IBD Stock Lists Outperform?

The strategy behind IBD's stocks lists is simple.

Through an ongoing study of every top-performing stock over the past 100-plus years, we've identified seven common traits big market winners typically share just before they launch their major moves.

Using IBD SmartSelect Ratings and other screening criteria based on that research, we identify which stocks are most strongly showing those same traits right now.

In other words, history shows what big market winners look like in the early stages of a new climb, and IBD's lists alert you to stocks that have that same look today.

Also note that the screens are computer-generated and based solely on objective rules, not human emotions, guesswork or predictions.

While you should never just buy a stock because it's on one of IBD's screens, regularly checking Sector Leaders and other lists is a quick and efficient way to build your own watchlist and zero in on the next crop of potential big winners.

Nvidia: Find Top Stocks Before They Break Out

To further speed up your research, you'll also find alerts to stocks in or near a potential buy zone in the chart analysis provided for each name on Sector Leaders, IBD 50, IBD Big Cap 20, IPO Leaders and Stock Spotlight.

For example, self-driving car technology leader Nvidia was featured in the IBD Big Cap 20 on March 1, 2016 and in the IBD 50 the next week on March 7. The chart analysis noted that the stock was “working on cup base with 34.04 entry, strong weekly RS line.” That gave you time to put Nvidia on your watch list and research the company before it broke out two weeks later.

From the breakout, Nvidia rocketed more than 750% in just 29 months. Throughout much of its run, Nvidia has continued to show up on various IBD lists, alerting you to additional bases and buy points. 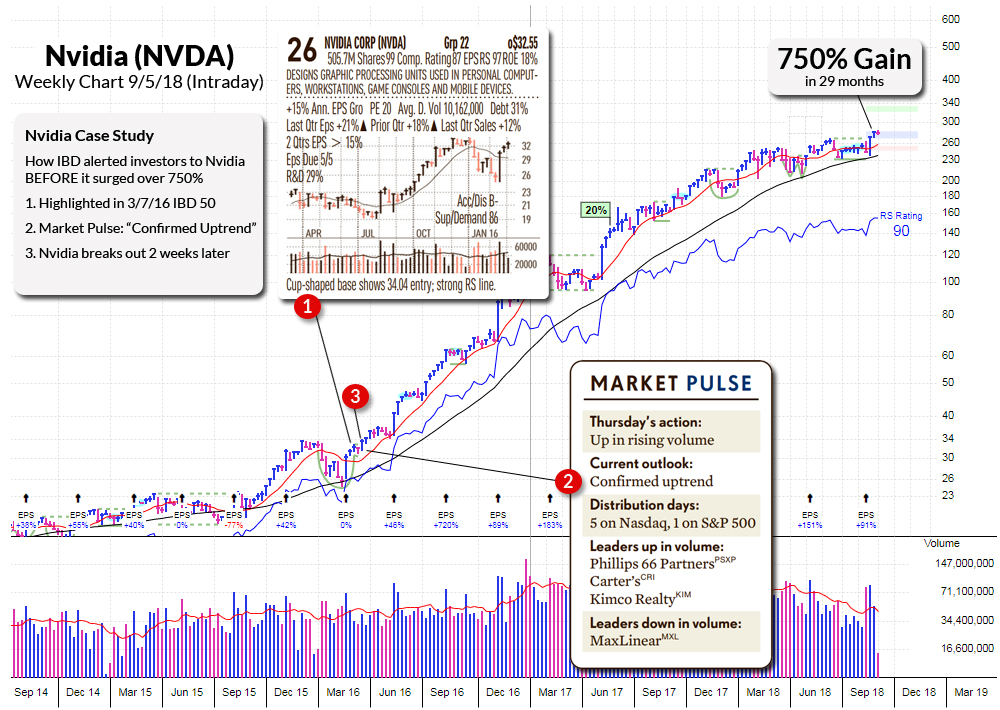 Nvidia is just one recent example of why you want to regularly check IBD's stock lists as part of your investing routine.

Not every stock on the lists will launch those types of gains, but checking these screens regularly is a proven way to help improve your investing results by quickly building a high-quality, actionable watch list.

Bonus: Our Top Stock Pick Of The Year

If there’s one stock that is an absolute winner this year in the technology space, it’s this one right here.

It’s a recommendation that comes from Paul Mampilly— the Wall Street legend who recommended Microsoft early on – and his recommendations are always exceptional.