Idiots! They’ve got it all wrong…

A few weeks ago, the “pros” on Wall Street started freaking out – about interest rates.

Specifically, they freaked out about “yield curve inversion.”

That finally happened in March… And the world is now using it as today's fear du jour.

An inverted yield curve does matter. It is a big deal. But the funny thing is, the “pros” on Wall Street have it all backwards.

The yield curve inversion that happened late last month isn't a reason to fear. It DOES NOT mean we should head for the sidelines.

It means we should step up to the plate and take advantage of this opportunity… before it's too late.

Long-term interest rates should be higher than short-term rates. That's the natural order of things. And it makes sense.

If you're locking your money up for 10 years, you should demand a higher interest rate than if you're locking it up for only a year or two. The reduced flexibility (and heightened risk) of long-term bonds should come with higher yields.

That's how things work in normal times. But not when you mess with the natural order…

You see, long-term rates are controlled by the market, while the Federal Reserve controls short-term rates. If the Fed artificially pushes short-term rates higher, it slows down the economy. And it's usually a sign that a peak is coming.

Last month, the three-month Treasury yield rose above the 10-year Treasury yield for the first new signal since 2006. This is why the media has been shouting about the inverted yield curve.

The question we need to ask is this… What happens next?

This is where a lot of folks get it wrong. They see the ominous sign and forget to dig deeper. Because as it turns out, history says this event gives us a serious moneymaking opportunity before the eventual market peak…

The last time this yield curve saw a new inversion was in January 2006. That kicked off a wave of recession fears and stock market concerns. These fears eventually proved true – but not before folks who acted had a chance to make serious gains. Take a look… 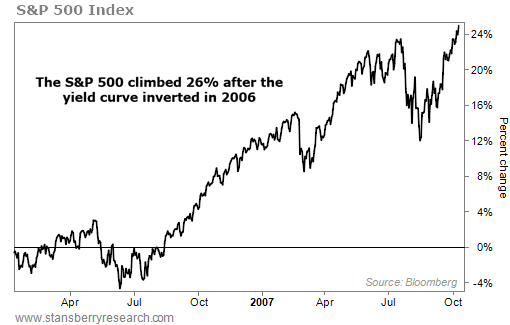 Stocks weren't anywhere near a top in early 2006. They went on to soar 26% over the next 21 months before hitting their peak in October 2007.

This scenario plays out throughout history. Over the last seven cycles, the first yield curve inversion occurred an average of 19 months before the next recession began. And stocks jumped 19%, on average, through the next market peak.

The top in 2000 is a particularly useful example for us today. Back then, the yield curve first inverted in September 1998. That was two years before stocks eventually peaked. And the market returned 55% over that time…