Buy “right” and you’ll laugh all the way to the bank.

The most dependable and consistent way to generate huge profits is to latch on to the world’s best companies when they’re “going up.”And if they’re not?You do the exact same thing… in reverse.I know what you’re thinking – that can’t be possible.Well, it is.What’s more, you’re missing out on half the market’s financial potential if you’re not profiting from stocks moving in both directions – up AND down.Let me explain.The world’s best companies – those we profile all the time – have the world’s best profit potential. Over time, that translates from higher revenues to higher profits and, in turn, to higher share prices.

Buy “right” and you’ll laugh all the way to the bank.

But, there’s a hard truth to this as well…

Finding big profits is more difficult than ever before because the amount of information investors have to deal with today is staggering. There’s Internet chat rooms, constantly updated headlines, curated content, advertisements… details.

You can’t help but feel like you’re missing out on something key.

The secret is getting back to what works.

That way, you know what to buy or sell and when to make your move for maximum profits. It’s given readers an incredible 72 winning plays this year alone.

Some 20 of which – roughly 28% of the total – have been from downside moves like the one I’m going to share with you today – meaning when a stock drops. Just click here to learn more about the High Velocity Profits approach and join in today.

Again, most people don’t think this is possible in a market that’s hitting new highs.

But that’s the irony.

Especially when a company’s in transition.

It’s an American icon, and people can’t imagine Harley going the “way of the dodo.” We are, after all, talking about one of the world’s most powerful brands and something so valuable that legions of the faithful ink it on unmentionable parts of their bodies!

People said the same thing about Eastman Kodak Co. (NYSE:KODK), General Electric Co. (NYSE:GE), and Sears Holdings Corp. (NasdaqGS:SHLD) – all of which are fighting for their lives and all which have lost their investors billions of dollars. Tattoos aside.

The fact that people feel so strongly about Harley makes your opportunity that much bigger and potentially that much more profitable!

Harley-Davidson’s Piotroski Score is a 5… and dropping.

That’s a measure you’ve heard me talk about before because it’s such an accurate measure of a company’s underlying financial strength and profit potential. Or, in this case, lack thereof.

In this case, Harley’s numbers are going in exactly the opposite direction from its smaller-but-stronger archrival, Polaris Industries Inc. (NYSE:PII). 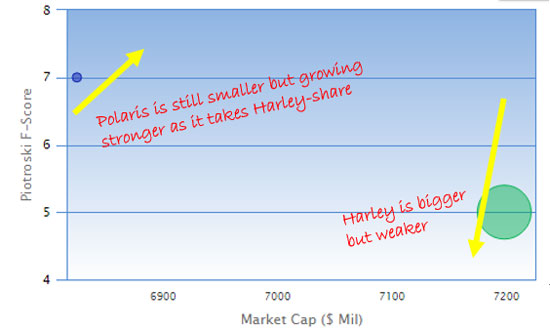 Harley is rapidly losing its mojo, and the speed of its decline is such that the company may have a Piotroski Score of only one or two within the next 12 months. Loads of research – in addition to my own – shows that’s a range consistent with companies at imminent risk of financial failure.

There are three ways to play this for big profits:

To be fair, you could also “short” Harley, but I wouldn’t recommend that in this instance because there are plenty of insiders who will fight tooth and nail against you as Harley comes unglued. I simply don’t think that’s worth the unlimited risk shorting entails in a rising market unless you’ve got the rock-solid discipline and risk management skills needed to pull it off.

More advanced readers could also consider vertical bear spreads or even diagonals to harness the rising volatility that will accompany this trade as it builds.

As always, Harley is a speculative trade, so treat it accordingly by limiting risk to money you can afford to be without if it doesn’t go as expected.

The fall of an American icon is never easy.

But, there’s no doubt it can be profitable for savvy investors following along.

Are You Collecting “Federal Rent Checks?”

After conducting an exhaustive investigation, our team has unearthed a mysterious, $11.1 billion pool of government money that’s being stored at the Treasury Department.

What caught our attention was where much of this money is being funneled.

It’s ending up in the hands of everyday Americans.

You see, back in 1972 Congress passed an obscure piece of legislation known as Public Law 92-313.

It stipulated that over 100 government agencies would be legally required to pay rent for the properties they occupy.

And it turns out some folks have uncovered an ingenious way to exploit Uncle Sam’s rent situation.

This entitles them to collect what we’ve classified as “Federal Rent Checks.”

Around the second week of every month, some Americans are receiving an envelope in the mail with $1,795 in it.

There are no restrictions on who can benefit from this powerful investment income stream.

So why aren’t more Americans stepping forward to collect what could rightfully be theirs?

Maybe it’s because while Public Law 92-313 obligates the U.S. government to pay rent, it does NOT force them to tell anybody they’re doing so.