The key to big profits is free cash flow…

I look at ’em differently and think you should, too.

That’s because mergers are one of the single greatest profit generators out there.

Take the all-stock merger between Harris Corp. (NYSE:HRS) and L3 Technologies Inc.(NYSE:LLL) that was announced last month, for example.

The deal is a transaction between “equals” – meaning neither company is assuming a dominant position over the other. Instead, you’re getting a single, far larger, integrated defense contractor.

The new and aptly named “L3 Harris Technologies Inc.” will generate something on the order of $16 billion a year in sales that should translate into profits of around $2.5 billion, according to company representatives.

That’s good by any stretch of the imagination.

But, I’m into GREAT.

That’s why I started Total Wealth and why we’re in this together.

It’s a well-proven formula… line up with one or more of the Six Unstoppable Trends, identify the world’s best companies, then buy the ones making “must-have” products and services the world cannot live without.

That’s what this merger is.

The newly formed contractor will instantly become the nation’s sixth-largest defense contractor and a top-ten global defense supplier with 48,000 employees and customers in 100+ countries around the world.

Critically, this will also produce an estimated $1.9 billion in “free cash flow.”

That’s the key to life-changing profits, especially today, and especially when it comes to a transaction like this one.

Free cash flow – if you’ve never heard the term before – is the cash a company produces after it pays for operations, less the cost of capital expenditures.

That’s a mouthful of very technical terminology, but there’s a reason I want you to understand the term.

Free cash flow is a metric not unlike the cash you have in your pocket. Plan efficiently, and you’ve got more of it… after you’ve paid for your gas, your food, and other living expenses.

Companies use free cash flow as a barometer for potential business expansion.

Sadly, most investors don’t pay a lot of attention to it, and the mainstream news outlets almost never discuss it.

Free cash flow is the one metric capable of sorting out the winners from the losers objectively, especially when it comes to big mergers and acquisitions like the L3-Harris deal.

You see, unlike most opinions which are completely subjective, free cash flow is an objective measure that can provide great insight into things like operational efficiency, potential profitability, how much money is left over for buybacks or dividends, and more.

Free cash flow is often a significant prelude to increased earnings, cost reductions, dividends, and share buybacks – all of which are great for your money.

It’s also one of the very few metrics that can give you a decidedly accurate view of the future.

Companies with large and growing free cash flow are the ones that will reward investors handsomely tomorrow for the risks they take in buying shares today.

You can run these numbers yourself, if you’re so inclined.

All you need is a simple balance sheet and income statement drawn from a company’s annual report or the online investor resources page most publicly traded companies maintain.

Or, you can simply visit a site like www.gurufocus.com, which does all the calculations for you.

Interpreting the results is simple.

There is one important caveat, though.

Because of the way it’s calculated, free cash flow is a “snapshot” in time.

To really make it valuable, what you want to do is look at how it changes over time. I typically look at three to five years.

At the same time, you’ll want to make sure you understand how various industries use and abuse cash so you can draw as accurate a conclusion as possible when it comes to any company that interests you.

Amazon.com Inc. (NasdaqGS:AMZN), for example, is constantly investing in growth, so there’s typically lower free cash flow available than there would be in a Walmart Inc. (NYSE:WMT), for example. Tesla Inc. (NasdaqGS:TSLA) may be accelerating receivables to boost revenue recognition and, presumably, share prices which suggests there may not be as much cash flow as everyone thinks.

Back to L3 Harris Technologies Inc.

The L3-Harris deal comes at a time when the President is ramping up spending, so there are bigger, more significant projects on tap. Everything from missile defense, to capital ships and, of course, to badly outdated computer systems is up for grabs.

[CRUCIAL] Is America’s 2nd largest private employer in trouble? (this pattern would indicate so)

Stuff that is literally so big and so complicated that very few single contractors can tackle ’em.

Unless, of course, they team up.

I recommended Harris in April 2015 to paid members of the Money Map Report Family, and it’s up a healthy 127.24% versus only 30.5% from the S&P 500 – which means everyone who is following along has a big, fat Cheshire Cat-like grin on their face.

If you missed out, don’t worry.

Mergers are almost always a sign of “the strong getting stronger,” which means there is undoubtedly further industry consolidation ahead.

Take as an example the Healthcare industry in 2017, which, for example, saw a giant $69 billion merger between CVS Corp. (NasdaqGS:CVS) and Aetna. The largest healthcare ETF, tracking the entire industry – the Health Care Select Sector SPDR Fund (NYSEArca:XLV) – appreciated a whopping 31.19% that year as lesser companies fell in line and more valuable ones plowed ahead.

Or, the Energy and Power sector in 2010. The big play that year was FirstEnergy Corp. (NYSE:FE)‘s buying of Allegheny Energy. The largest ETF for that sector – the Energy Select Sector SPDR ETF (NYSEArca:XLE) – jumped 19.72%.

Two years ago, I made the biggest bet of my life.

I wagered I could show average, everyday people how to buy stocks that are only going up, with 100% certainty.

To put it simply, I not only won that bet… I crushed it… recommending trades with 4,829% total gains in 18 months (which to my knowledge is a record for the industry).

And now I'm ready to do it all over again…

On November 8, 2016 – just 24 hours before Donald Trump got elected – a mysterious “X-Pattern” appeared on the Dow Jones Index. And the very next day the Dow soared toward new record highs.

This mysterious “X-Pattern” was apparently able to signal what the pundits and prognosticators could not; that a Donald Trump election was welcome news to American investors. 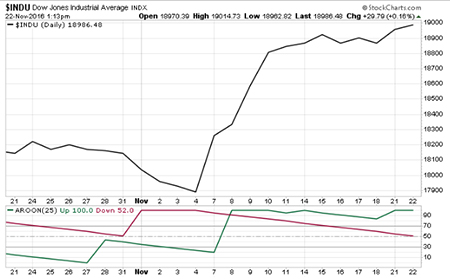 And as you're about to see, this wasn't a one-time event.

In fact, if this pattern appears on any stock, there is 100% certainty that it's on its way up.

And to make sure you get a chance to profit from this pattern, I've put together a presentation to explain exactly how it all works.

And I'm expecting even bigger gains to come.

Click here and I'll tell you what you need to do.