Consider this your official notice that GE stock is almost a buy again.

It’s been a long while since General Electric (NYSE:GE) has created any real inspiration for investors. It’s been so long, in fact, that the market may not recognize it when they see it, or perhaps not believe it even if they recognize it.

It’s not a story that needs much in the way of retelling. GE stock continued to climb through 2016, reflective of its pedigree. Beginning in 2017, though, years’ worth of poor-decision making and obfuscation finally came home to roost. The company was (and still is) sitting on more debt than it can manage, and General Electric can’t figure out its role in the current, digitally-driven marketplace. The fact that it has seen three different CEOs over the course of the past couple of years speaks volumes.

There’s a path out of its trouble, to be clear. Its Power unit desperately needs to figure out why its wares aren’t marketable, and it needs to decide if it wants to be in the healthcare business or not. The once-vaunted organization also needs to get a grip on its debt. Here, shedding assets is logical but may not be the most optimal solution.

There’s no denying, however, that where GE is now is a much better place than where it was last year. The most recent quarter’s cash burn was a relatively modest $1.2 billion, versus the $2.16 billion in negative cash flow analysts were modeling. Earnings topped expectations as well.

It’s difficult to call it conclusive evidence of a turnaround. Even CEO Larry Culp conceded during last quarter’s conference call that “One quarter is a data point, not a trend.”

All new trends start with a pivotal quarter though, yet most of those pivots are largely dismissed in their infancy.

[Trending] The 5G Revolution Is Here. Get the Top 3 Stocks to Invest In

Case in point? None other than Apple (NASDAQ:AAPL).

Think back to the mid-1990’s, years after Steve Jobs stepped down as chief. Innovation and revenue had deteriorated, opening a huge window of opportunity for rival Microsoft (NASDAQ:MSFT) at a key time for the computer industry. Apple was almost bankrupt, but Steve Jobs took the helm again in 1997 and steered the company back to profitability.

Few thought it could happen at the time, however.

Lower profile but just-as-impressive turnarounds have also taken shape in the modern era.

Best Buy (NYSE:BBY) is one of them. After being nearly run out of the electronics business by Amazon.com (NASDAQ:AMZN), turnaround expert Hubert Joly took over in 2012. By the end of 2017, it was clear his plan was working. More income growthin the meantime confirms the company is out of trouble.

As it turns out, the suggestion made back in early 2012 that “Electronics retailer Best Buy is headed for the exits” wasn’t quite on-target. It certainly seemed like the inevitable outcome at the time though.

Point being, don’t sweat the doubt: we’ve seen it before. Investors and analysts will change their tune when they must. And, they may have to sooner than later.

Looking Ahead for General Electric Stock

To that end, and not unlike the five psychological stages of dealing with grief, investors’ perception of a turnaround generally follow a sequence. One of the earliest stages is, of course, denial. That’s where most investors may be right now. It’s holding General Electric stock back. 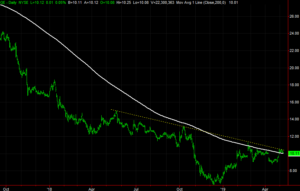 We’re awfully close to the bargaining and acceptance stages though. GE stock only needs to travel a tad higher to convince enough readied investors that the worst is in the past. Namely, shares only need to push above the resistance line that’s touched all the key highs going back to last May before everything changes. It’s only about 20 cents above the equity’s current price.

But rhetoric and headlines still aren’t bullish enough to sustain a post-breakout rally? Don’t give the media and the mob so much credit. The news and opinions in this particular case reflect the changing chart. They don’t drive those changes. Look for a swath of “I told ya so” stories to take shape if GE stock can get to $11 per share, which will fan the bullish flames.

At the very least it’s a stock worth adding to your watch list.

Next: The Clock is Ticking For America’s Most Hated Company