Turns out, it’s a great time to be a gold miner … outside the U.S.

“You have a very U.S.-centric outlook … but I’m telling you, it’s great to be a gold miner right now.”

I was on the phone with the CEO of a gold mining company. His company operates in Mexico and Canada, and he was thrilled.

“I know. There are still bargains to buy out there. Follow the gold price … it’s ripping in places like Australia,” he responded.

His comments stayed with me. I pulled up gold prices on Bloomberg and sure enough, he was right … more than right. Certain gold miners were having great quarters…

Move Your Gold Investment Outside the U.S.

Turns out, it’s a great time to be a gold miner … outside the U.S.

If you produce gold in Mexico, Canada or Australia, you are making a ton of money. That’s because gold priced in those currencies is at or near all-time highs. And you get to pay your workers in those currencies. That means your costs are low.

At the same time, the stuff you produce — gold — is ripping higher. As you can see from the chart below, the price of gold hit $1,871 per ounce in February 2019 … its all-time high. 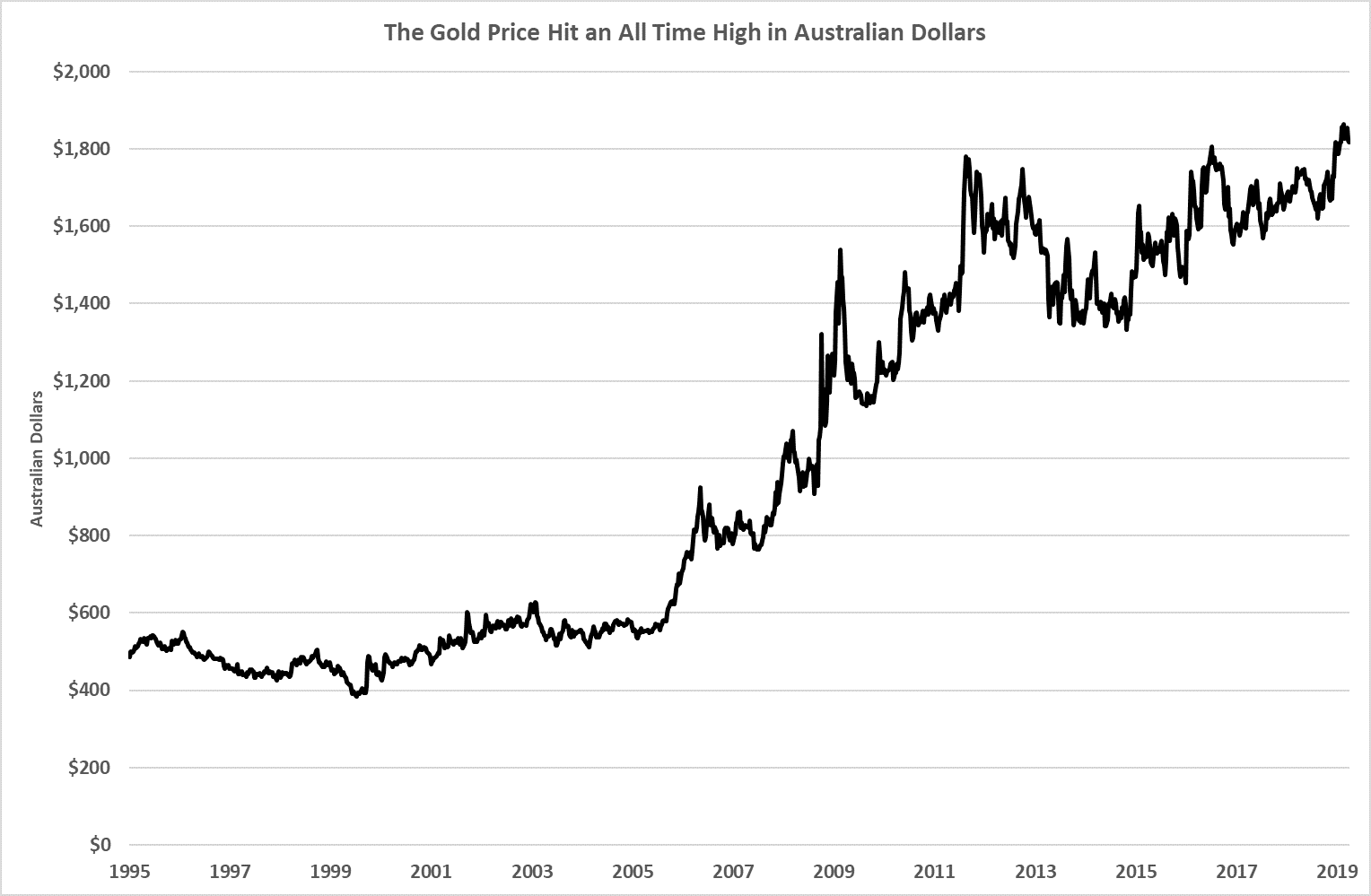 We can use this to our advantage by finding companies that operate in places that have high gold prices.

First, the companies can sell their gold at high prices.

Second, high gold prices reflect weak currencies. So, they are paying mine costs in the local currency. It works well.

We can see that reflected in Australian companies’ earnings. For example, Newcrest Mining’s cash rose from $203 million at the start of 2017 to over $1 billion today —

That reflects strong cash flows from operations. It did that while spending nearly $300 million every quarter on operations.

Companies that operate in places like Mexico, where the gold price is within 10% of its all-time high, will have that tailwind.

You can see the break down in this table of gold prices:

Foreign Gold Miners Have an Advantage

However, the reverse is also true. Companies mining gold in the U.S. have a headwind compared to their peers. They are selling gold that’s well below its high.

And they are paying costs in one of the strongest currencies in the world — U.S. dollars.

I strongly recommend that you hold gold miners in your portfolio right now. We see a solid bull market emerging in gold and precious metals into 2019. And if you want to find the companies that will outperform their peers, stay out of the U.S.

As my Canadian friend said, focus on miners operating in Australia, Mexico, Canada and South Africa. They will be the biggest winners in this bull market.